Okay, got a strange one here.

The reason being, when I turn it toward a light source the signature throws off a different reflection from the rest of the photo just like a real hand signed photo would do. I donâ€™t think itâ€™s auto-penned either as thereâ€™s no dots at the beginning and end from where the pen would come down. And itâ€™s done with a bold style sharpie too, another thing Iâ€™ve not seen with Celebrity Merchandise photos.

Has anyone else gotten one of these CMMâ€™s from Celebrity Merchandise? If so, Iâ€™d love to see scans to compare signature placement and autograph size.

When I requested mine it said on the CM site that this photo was â€˜newâ€™ to their selection. Is it possible he actually signed a limited number of these to be handed out?

Opinions and comments are appreciated!

Here's even more proof I'm thinking it's real. This is the link to the CMM photo on Celebrity Merch. As you can see signature placement and size are very different.

Plus it's not listed with all the other 'FREE photos' section.

Yeah, I agree that definitely looks real. CM usually has really obvious reprints but that looks a lot different... who knows though! How long ago did you place that order? I placed one about a week and a half ago and I'm waiting for it.

I sent my request on June 4th. Let me know when you get yours! I'd like to see if it's different as well! I might contact CM and ask if they are doing a limited number of these.

I do think it odd for them to be sending out free "Authentic" autographs. i cant really tell maybe look him his in-person autograph? either way Congrats on your success!!

Yeah, I'll see if I can find some IP examples. I just find it strange that this photo isn't listed with all the other free ones though.

I'm sending CM an email right now inquiring about this.

Thanks for the example!! Here's one I found that a girl got TTM. It looks pretty close to mine, just a shortened version.

I'm serisously leaning towards authentic on the one I got. 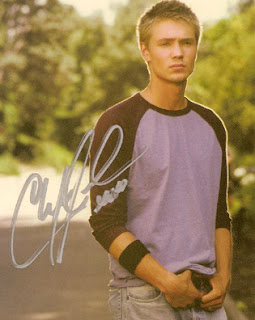 Wow, i never even looked at mine that close. :O
lol, for some reason they sent me every single photo available. :/
But anyhow, mine is different too! In a totally different spot, and the signature is a little bit smaller.
Can't post any scans, my camera is dead at the moment. Lol. ;)
Top

Good to hear!! I've still not heard anything back from CM in regards to these being real, but I'm gonna go head and say YES! these are authentic as there definately not auto-penned.

Users browsing this forum: No registered users and 2 guests